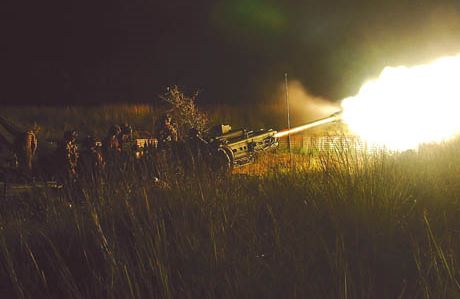 The night was full of sound as the team made their way back to their encampment. In the distance heavy guns roared, spitting their massive rounds into the air, their shells landing only a short distance away. Nonplussed by the cannon fire, the dirty and exhausted group of men and women talked about what they had collectively accomplished, experienced, and learned earlier that day. As the team of business executives and transitioning military veterans discussed the lessons of leadership, team and camaraderie building, they listened to the artillery rounds whistle through the air overhead…

Clearly this was no ordinary leadership training event. Instead of a classroom or conference hall these students worked and learned in the training grounds surrounding one of our country’s largest military training facilities. Rather than listening to the lecture of an academic or pundit, the lessons were hands-on, in the field, with visceral instruction provided by the best trained leaders our nation can produce. This was a Project RELO mission, and it was here that corporate executives and veterans collaborated to teach, learn, team and lead by example.

There is nothing typical about Project RELO. As a nonprofit dedicated to correcting the veteran underemployment problem, its focus is on corporate America. With 35% of firms citing the talent gap as one of their greatest challenges, organizations are hungry for employees that are resilient, adaptive, selfless team members and skilled leaders. Companies that send executives on a Project RELO mission invest in the leaders they have, while simultaneously coming to understand that our veterans are rich in the skills and character that they require to run and grow their businesses.

The immersive, physical, and even gritty environments in which the training was conducted was similarly unique. Starting on Camp Grayling in Northern Michigan, the course began in the military simulators where participants fired simulated rounds from real machine guns and other military weapons. Convoy training and virtual reality simulations enhanced the instruction and laid the framework for understanding the nature and extent of how our military members are trained.

Yet it was on the second day that participants learned that there is far more to our veterans than firing weapons and destroying the enemy. Through interaction and example, Project RELO’s veteran mentors and instructors made it clear why our military is the world’s mightiest, not just because of the technological dominance of our weapons, but also because of the strength of our service members’ character and training. As one executive observed during the last Project RELO mission, “I simply had no idea that our veterans have such a diverse and relevant set of skills.” He ended with, “I need people like this”.

Leadership instruction was only one aspect of the Project RELO exercise. Other “lessons” were spontaneous and profound. In one case, an executive participant balked at navigating the underground tunnels in the combat town training area. Claustrophobia made the underground walls feel like they were destined to crush him. Having to choose between succumbing to his fears, or potentially disappointing the decorated war hero directly in front of him, he chose to press ahead. As he emerged from the tunnel complex his elation was real, his pride and sense of accomplishment palpable.

Another lesson was taught and learned when the group was observing a live-fire mortar exercise. An executive participant dropped a coveted challenge coin, quickly losing it between between the floorboards of the observation deck. As he looked down to determine whether there was any way to retrieve the lost item, he noticed two veteran team members were already crawling underneath the structure to retrieve the coin.

Throughout life we often forget that which we once learned. Reminders are often necessary. During Project RELO missions, we recall many important, basic tenets. In this case, everyone was reminded that great leadership requires superlative followership, and that selflessness is a critical virtue for any effective team member. It is also an essential ingredient for any leader.

The third and final day ended quietly. Like the two mornings before, the group fired up their vehicles and lined up in formation to depart. Today, no artillery blasted the nearby ranges. The 50 cals were silent. As the group navigated the winding trails there was a sense of accomplishment, but also something bigger and more pervasive. Both business executives and military veterans alike had earned each others respect and trust. Life-long lessons were learned, bonds were formed, and memories created that will never be forgotten.

Clearly this was no ordinary leadership training event.