Have you ever worked for or applied for a position with a company known for hiring veterans? When soldiers return to the U.S. from being on duty, they bring with them a unique set of skills that often make them beneficial and desirable job candidates in the corporate world. However, sometimes, this is overlooked by potential employers.

There are currently more than 44,000 veteran nonprofit organizations in existence. What sets Project RELO apart is that the group is changing the narrative from corporate America helping veterans by hiring them, to veterans helping corporate America by being hired into positions that maximize their impact. Casey McEuin, the president and executive director of Project RELO, says, “We do this by immersing corporate executives, usually from directors of HR all the way to the CEO level, into a three-day pseudo military operation where they are led by the very veterans who are looking at transitioning from military ranks into ranks of the companies in attendance. Through these three-day operations, executives get a firsthand look at the value veterans can bring to their company and get to see past the verbiage written on a resume. They see the true character of a veteran. Through this, we shift the dialogue from hiring a veteran for a social good to actually doing so because it is good business!” He adds, “We see ads or events that discuss the victimization of veterans and know that veterans need assistance. We want to change that dialogue and show companies they need veterans and what they can bring to the table. Above anything else, we are not about giving a veteran a handout. Moreover, we are focused on initiating the handshake.”

Mr. McEuin has been the president and executive director of Project RELO since the organization’s inception in 2016. He served in the U.S. Army for 17 years. In 2011, he was critically injured in Afghanistan during an attack on his outpost, which subsequently forced him to be medically separated out of the military. He shares, “Once I got out, I struggled to assimilate back into the civilian world. I struggled to find work and ended up making the decision to live out of my Jeep for a few months.” While living in his Jeep, Mr. McEuin decided he wanted to be part of a change that could ultimately help veterans avoid going through what he was. “I finally found work in the nonprofit world, hoping to make an impact,” he shares. In April 2016, Mr. McEuin was invited to the White House to be honored by former President Obama for the work he was doing for veterans. After being honored, the nonprofit he worked for sent him to events to speak and sent him on the very first Project RELO mission where he and the founder bonded immediately. “We knew our visions for taking care of veterans aligned with one another. I resigned from my old company and took the reigns of Project RELO,” Mr. McEuin says. 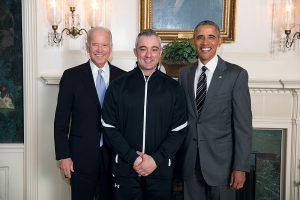 To help Project RELO meet its goals and bring attention to the organization’s cause, there is an annual fundraiser held in Frisco. This year’s February 21 event, taking place at Verona Villa, will have a Charity Casino Royale theme that is expected to bring people from around the nation together to raise money. Every dollar raised will go directly to Project RELO’s mission to educate corporate America about the value of hiring veterans onto their business team. “Through this education, we drive demand for veteran talent,” Mr. McEuin shares.

The Casino Royale event is highlighted by its poker tournament where the winner will win a seat at the World Series of Poker Main Event in Las Vegas, where, last year, the winner was on global television at the main table of the event. This month’s event will also feature a silent and live auction, live music, food, a cash bar, casino games, a state-of-the-art photo booth, many NFL players/alumni, local celebrities, Medal of Honor recipients and more. To get additional information about the event or to order tickets, visit casinoroyale.live. The event team is hoping to highlight many Frisco companies and has numerous sponsorship packages available.

Project RELO educates corporate America in five ways. First, they provide publicity and public speaking to underscore the mission and change public perceptions of the value of veterans in business. Secondly, they have established a speaking platform called “VET talks” allowing veterans to showcase their successful transitions and workplace value. They talk about innovative and inspiring ideas any business leader would want for their company. In addition, Project RELO has missions that help individuals experience the unique abilities veterans possess that are common misconceptions. Launching in 2019, the organization is adding “Project ALPHA,” which showcases how elite mindsets think alike, even when environments are different. While similar to Project RELO missions, this is run by elite special operations service members (Delta Force, Navy Seals, Marine Force Recon, Green Berets, etc.) and partners one-on-one with high-level CEOs in high-tempo operations conducted on military bases. And, finally, the organization fosters corporate connections and networking for company-wide shifts in perception and intimate ties between the military and corporate America.

One of the most important elements leading to the group’s success are the three-day leadership courses. Project RELO courses “provide the best leadership training. Period,” Mr. McEuin assures. “Training missions are conducted on military bases where participants and transitioning veteran instructors conduct multi-day pseudo military operations. Participants develop a deep understanding about the character, quality and full extent of veterans’ skills. And with this understanding comes appreciation and a desire to hire more former military members into their respective organizations.”

During Project RELO missions, participants conduct real physical convoy operations, navigating to various objectives in massive military training areas. Weapons training (real weapons/simulated rounds) and high-tech simulators provide a glimpse into military members’ backgrounds. Exploration of combat towns and mock negotiations with costumed mullahs diversifies understanding of veterans’ skillsets. “As the collective team navigates various obstacles that invariably arise during any military operation, leadership, teamwork and selflessness allow the collective team to meet its objectives. It is also here that participants experience the best leadership training available anywhere. Instead of in a classroom or on a whiteboard, leadership is taught by example.”

Afterwards, Project RELO continues its veteran advocacy beyond missions by helping firms establish or improve existing military hiring programs. Companies have the option to join a planned mission or to let the team at Project RELO create one for them. Mr. McEuin says, “If companies like Microsoft, Amazon, Google, UL, JCPenney, Sprint, Walgreens and more have looked to us, then imagine what we can do with other companies. The word we live by every day is ‘impact.’ Through Project RELO, we are making an impact in the lives of veterans because we are removing the proverbial red tape in companies that once had a hiring bias against veterans. We are making an impact in business by helping their bottom line and connecting them with veteran talent that will help their organizations grow!”

Volunteers are critical to fulfilling the organization’s mission and have helped build it up through things like fundraising, event organization, website design and social media outreach. The team is looking for people who are passionate about raising awareness on the value veterans bring to organizations.

Any business leader looking at being part of the change can join this leadership mission or help sponsor veterans. Veterans and community members can learn more about this organization and find ways to get involved or volunteer at projectrelo.org.